Results. The unimpaired adults performed with high accuracy (Fig. 1A) and their eye movements indicated encoding of N1 during the PreN1 region (i.e., fixations on the Agent in actives and Theme in passives) and encoding of N2 during the N1 and V regions (Fig. 1B). In participants with aphasia, picture description accuracy improved significantly with treatment for passive sentences, but did not change for actives (Fig. 1A). No treatment-related changes in speech durations were observed for either structure. Pre-treatment eye movements were qualitatively abnormal, and did not differ between passive and active trials in any sentence region (Fig. 1C). Post-treatment, eye movements were qualitatively more similar to those of unimpaired controls, albeit on a protracted time scale, and indicated encoding of N1 during the PreN1 and N1 regions and N2 during the V and N2 regions (Fig. 1D). Stable performance was observed across measures for passive sentences within the two pre-treatment sessions, as well as the two post-treatment sessions. Conclusion. These findings indicate that treatment supports re-learning of both offline and online sentence production, with the latter reflecting changes in cognitive strategies used to produce sentences. The emergence of normal-like sentence production processes in individuals with aphasia suggests that, rather than teaching compensatory strategies, treatment enhances access to normal processing routines. Post-treatment eye movements indicated relatively successful thematic mapping and encoding of sentence constituents. However, they were also suggestive of reduced incrementality as compared to unimpaired speakers (i.e., N2 was not encoded until production of N1 was complete), indicating residual deficits in sentence production planning. These results indicate that eyetracking is well-suited to detect change in sentence processes over time (cf. Mack & Thompson, submitted). 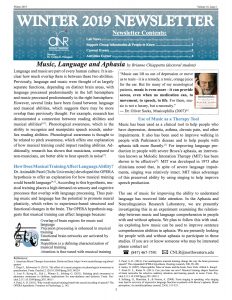